Are your visitors running away? 5 rules for finding the words that grab attention 2020 -

Are your visitors running away? 5 rules for finding the words that grab attention 2020 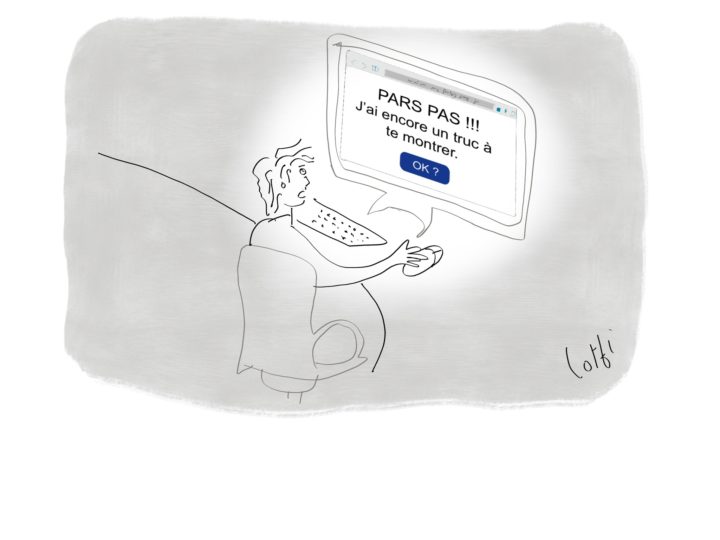 Riddle: what is the most important thing on your website? Reply : the value proposition. Yes, unfortunately, you are neither Amazon nor Google. It is not enough to say your name for people to know who you are and what you are doing. A visitor who comes to your site for the first time will only grant you 7 seconds attention. If nothing holds him back, he will go elsewhere.
It is the value proposition that is responsible for arousing its interest …

This little phrase tells your visitor that you will help him solve his problem as illustrated in the diagram below. So she is your best asset in the battle of attention.
The good news is that by digging your head a little, you will have great opportunities to out.

“That’s it, my decision is made. I will go back to sport and run three times a week.
I’m going with four colleagues All of them are as determined as I am. In 9 months, we will run the Paris marathon. “

Many of us make this type of promise. Group sport increases motivation.

The problem is that some of us give up along the way.

Too much work, kids going to school, lack of sleep, etc. The reasons can be many and not always very good.

Dick Costolo, created the startup Chorus by saying that there was an opportunity to stand out in the very competitive field of sports coaching.

Costolo had many assets to impose its platform in the middle of a jungle of offers.

He was one of the first private investors to enter the capital of Twitter before being appointed CEO of the company between 2009 and 2015.

Under his responsibility, Twitter has become the major social network that we all know.

Are you a victim of the effect of abstinence violation?

In fact, discouragement in group sports corresponds to a syndrome known in treatments for drug dependence, the effect of abstinence violation.

In the 1970s, doctors developed an accompaniment method to combat the low morale of drug addicts during their treatment.

Dick Costolo was therefore inspired by this method to develop Chorus.

In his mind, if people ended up being convinced that their discouragement could be “cured” by Chorus in the same way that doctors treat the effect of abstinence violation, the application would become a cash cow product.

Unfortunately, nothing went as planned. Only the public regular athletes group training appropriated Chorus to organize its sessions.

The startup ceased its activity at the beginning of 2018.

Too general a promise

As Al Ries and Jack Trout point out in their book “Positionning The battle for your mind”, customer attention is constantly sought. To stand out, the creator of a product must think of two things:

While reading the value proposition of Chorus, we realize that the company’s promise was too general and didn’t get the attention.

“It is difficult to be healthy.
With friends, it’s much easier. “

This promise could apply to a non-alcoholic evening, a vegan meal or a walk in the forest on a sunny afternoon.

A language that is not that of the chosen customer segment

In addition, the scientific argument given in the description of the product (abstinence violation effect) tends to extinguish the interest. Its overly medical formulation does not allow ordinary people to identify with the problem described. The founder of Chorus himself recognizes this.

In this sector, two success stories come from the PumpUp and Nerdfitness fitness communities.

PumpUp, a community that encourages you

PumpUp is a Canadian company based in Toronto. The company created a sports coaching application in 2012. In 2015, it had nearly 2 million regular users and benefited from a first fundraising on very advantageous conditions.

By the end of 2017, the active community had tripled in size to reach 6 million members.

PumpUp does not target fans of the “inflator” or intensive sport, but rather those who need support in their progress. It emphasizes the link between sport and diet rather than just physical activity.

The company’s communication uses the codes of the women’s magazines, which suggests who the company is primarily aimed at.

Its value proposition is as follows:
“Become the best version of yourself. Achieve your goals health with the most positive community in the world “.

The association of the words health and positive community translates a stronger bias than that of CHORUS.

A good value proposition must meet these three criteria. But PumpUp could have done even better, customer identification lacks sharp edge. The phrase “the best version of yourself” is best suited to geeks only active women.

The example of the most successful positioning in the field of sports coaching comes from a community which at first glance does not look like much: Nerdfitness.

Nerdfitness, for the “unsuitable”

Steve Kamb created nerdfitness.com in 2014. It started out as a blog about the topic of motivation for sport and health.

Today, Nerdfitness is a thriving company. She sells online coaching programs and her site is the place to gather a very active community.

Steve Kamb is not reporting on turnover, but in this interview, he reports around 40,000 / registrations per month on his entry opt-in form.

The business is more precisely people facing poorly motivating situations. That is to say those who spend their days in offices, the women who have just given birth, those who have always been afraid to engage in physical activity by afraid of not getting there, etc.

One of the key points of a good value proposition is to allow the reader to identify with the promise made on the site. Nerdfitness give a name to his audience and stands by his side.

“Over the past eight years, we have helped 40,000 men and women from around the world to get lasting changes. No products, no supplement, no gym.
Nothing but the truth : a plan and an community to help you. “

Nerdfitness has the strongest value proposition and the most assertive positioning.

The result is that despite significant limitations (no application and a training program deemed light), the company is today one of the most active and popular fitness communities in the world.

The 5 foundations of a good value proposition

To avoid the problem encountered by Chorus, Ash Maurya recommends in his book, Running Lean, to lay the following foundations to lead to a good value proposition:

Here is a table that summarizes the difference in positioning between Chorus, PumpUp and Nerdfitness: 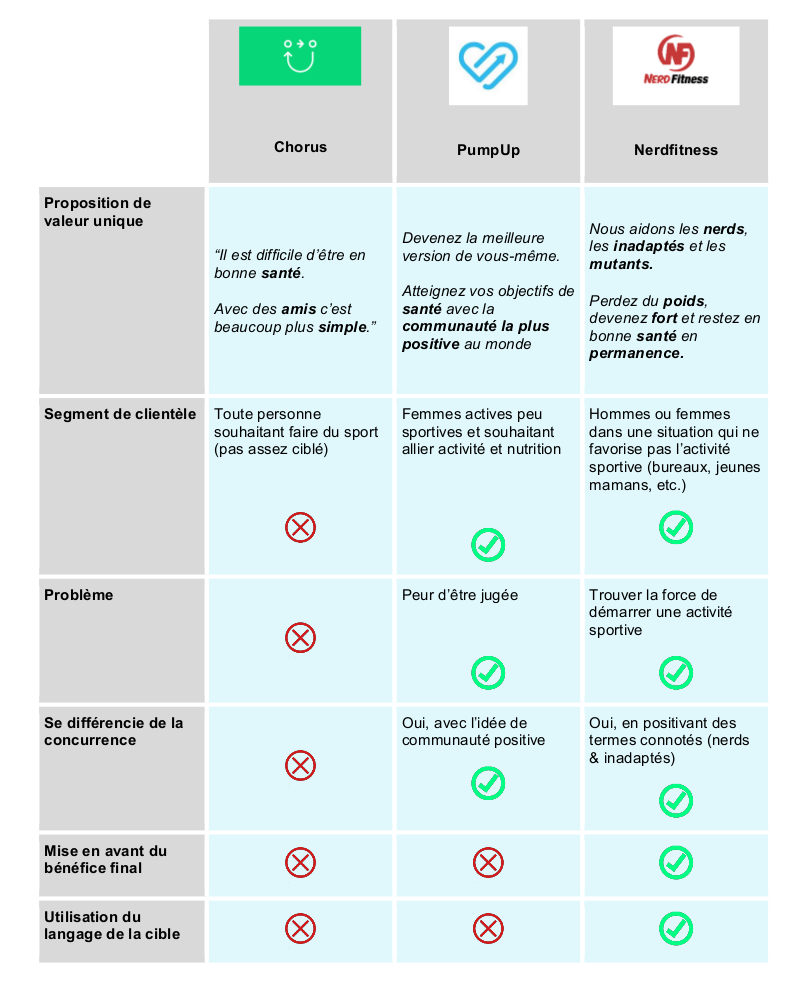 While being on the same market as Chorus, PumpUp and Nerdfitness have very different results.

These two companies have took the time to find their audience, to refine the problem they wanted to answer and to propose the most suitable solution.

Identify your customer segment and the situation in which it is

The first step is to identify the client segment with which you want to work. It is indeed impossible to find a good value proposition by targeting audiences that are too different from each other.

The more you manage to characterize your visitors, the more you will be able to send them adapted offers.

Here, Ann Summers goes so far as to take into account the weather in your home. A network of words and pictures lets you guess the subject without having to do too much.

The identification of a customer segment is a work that is done over time and with many back and forth as I specified in my previous article.

Find the right problem to deal with

After defining its customer segment, it is necessary to analyze the problems with which it is confronted.

You have to focus on the biggest difficulties that a prospect would like to see resolved.

But not everyone has the same perception of a problem, and this difference is an opportunity to stand out from the competition.

Here is an example :

If you like to cook, you probably have a preference for fresh produce, especially aromatic plants. But you also know that it’s almost impossible to grow these plants out of season.

The startup Ready to Push identified this problem in 2016. She proposed a connected and particularly elegant design vegetable garden. It contains small pots, seed refills, lighting and a water supply. The set allows you to grow herbs at home, in any season without worrying too much. If the water tank is empty, an alert will alert you on your phone.

The results are excellent, although the varieties of seeds that can be grown are quite limited.

Very quickly, competitors appeared. For the most part, they are content to offer cheaper products.

It’s not the choice made by Real vegetable garden who sells a device twice as expensive than Ready to Push (189 € vs 99 €). This company has gone back to the level of the problem and presents its solution in a different way.

By analyzing the approaches of the two companies, we distinguish two customer segments and two different problems.

Veritable vegetable garden is intended for those who spend a lot of time in making dishes and very often add spices to their dishes while Prêt à Pousser targets those who cook from time to time and attach more importance to the design of the vegetable garden and its small footprint.

This difference can be seen in the respective value propositions.

Differentiate yourself from the competition

A good unique value proposition describes the essence of your website in a few words so that differentiate yourself in the eyes of the prospect.

Your product must be different, but make sure that difference matters. – Ash Maurya

His value proposition is: “We make your life easier with our accounting software.”

By putting on the entrepreneur’s emotions (not to suffer because of accounting), Lessaccounting is radically different from its competitor, Quickbook, which nevertheless targets the same audience.

Focus on the bottom line

A website that advertises “Find the job of your dreams” will get much more attention than another that offers: “Our platform values ​​your CV and skills”.

Use meaningful words for the chosen customer segment

Each audience has its own language. In the case of aromatic plants, for example, there is no point in using the word “performance”. This term will be more suited to a site that sells accessories for sports cars.

The example of the Dollar Shave Club:

The Dollar Shave Club is a startup that has developed a subscription in which we send you a good quality razor every week, the price of which is set at 1 dollar.

By becoming a member of the Dollar shave club, there is no need to think about buying refills or new razors since these are shipped weekly by mail.

The club’s value proposition is simple and effective: “A beautiful shave for a few dollars through month. “She responds to the buyer’s concerns with her own words.

The visual also helps to establish collusion and a common language. The creator of the company appears in the image of open shirt, loose tie and rolled up sleeves.

The video recording is carried out in the warehouses of the Dollar Shave Club, with the employees of the company. The background of the website shows wooden planks, synonymous for the Club of authenticity and rusticity.

The company thus stands out from the usual communication of the giants of the sector where aseptic ephebes highlight the performance of shaving in minimalist decorations. We all remember “Gilette, perfection for men”.

Click on the following link to download your guide – 10 value propositions that you should be inspired by… and 7 examples of what you should avoid.

A 40 page guide in which you will find:

– 10 exemplary proposals analyzed in detail to inspire you;

– 7 failed proposals and mistakes not to make;

– A method to write your value proposition (or improve it);

– How to use words, pictures and suggestions to get the most complete message.