Not so long ago, Kevin Dangu introduced the principle of co-creation in his article “Co-creation: retrospective and ambitions. This interview aims to deepen the subject with Yannig Roth, professional in the sector, graduate in CWT Advertising at ESSCA and researcher / doctoral student at the Sorbonne, who gives us his opinion on the prospects and challenges of participatory competitions …

Hello Yannig! History to start well: could you introduce yourself quickly for the readers of CWT Advertising & Co’m?

My name is Yannig and I am a doctoral student at Paris 1 Panthéon-Sorbonne University, where I am preparing a thesis on crowdsourcing. More precisely, what interests me is to understand who are the participants in crowdsourcing operations, and why they participate (to use the examples cited by Kévin: who will participate in the Tic-Tac operation? Why is there Did he participate in Heineken contests?).

We are entering an era where the creativity of consumers is increasingly sought after by companies, but we too often start from the principle that their participation is acquired. Some do not want to be asked, others do not have the time or see no point in participating. But if it works, it’s also that some consumers want to be creative, because they love to express their creativity, because they like the brand or the products, or because there is money to be made! We still know too little about it, and it is crucial to understand the mechanisms that make certain participatory marketing operations work, and others crash. This is a very recent and little explored area, which is an ideal playground for researchers!

On your blog, you talk about crowdsourcing instead of co-creation. Is there a difference between the two?

In fact I’m talking about both. These two concepts are different, and we sometimes tend to confuse one with the other. In his article, Kévin explains that co-creation consists, for a company, in developing products or services in active collaboration with its customers, in a sustainable and transparent manner. This definition is absolutely correct, and I give many examples of co-creation on my blog, but it is also very broad.

Indeed, if we take this definition, we could speak of co-creation for any initiative that appeals to consumers: focus groups, consumer panels, questionnaires, workshops, creative contests… why not. But the downside in which we quickly fall is that we succumb to the fashion effect and that we use the term “co-creation” for everything that involves a minimum of listening to the consumer, which is not new. So I think the concept is too vague to be studied rigorously (look at these few academic representations of co-creation), and so I decided to focus on crowdsourcing. 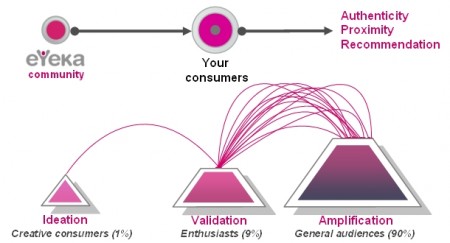 Crowdsourcing is the act of calling upon a crowd of contributors for the accomplishment of a specific task, such as brainstorming, design of packaging, or creation of an advertisement. In French, we can translate the term by “crowd supply” or by “open outsourcing” as did Jean-Fabrice Lebraty of the University of Lyon 3. To co-create with consumers, a company can put a crowdsourcing operation in place, but it can also use a lot of other co-creative techniques. You can read this interview of Bernard Cova, one of the French experts in terms of co-creation, if you are interested. So the concepts are really similar, but it is important to distinguish them.

Is greater integration of the consumer in business strategy possible? To what extent?

It is entirely possible, and we are seeing more and more initiatives involving consumers. Some appeal to the creativity of Internet users by setting up crowdsourcing initiatives (look at the success of platforms like eYeka or Creads), others animate online communities (like the Cvous site of the Casino Group), others invite consumers directly on their premises (as at L’Alpha Agence du Crédit Agricole)… there are many examples. But it is important to remember that consumer involvement, or co-creation, is not an end in itself!

A company has a profitability objective: its objective is to perpetuate its activity for the benefit of shareholders and employees. So it only has an interest in co-creating if it can justify a return on investment, such as a gain in efficiency in the innovation process, better knowledge of consumer expectations, a benefit of image or notoriety if we want to talk about the brand. But if we can’t get a concrete benefit from a co-creation strategy, I don’t see what interest a traditional company can have in involving consumers (apart from succumbing to a fashion).

Consumer involvement is not an end in itself!

There are great successes in co-creation in England, but there are also failures, such as the start-up Crowdspirit or the Btwin Lab platform of the Oxylane Group, which stopped because they obviously could not make their projects profitable. . We must learn from these experiences, and especially not consider them as failures. Even if they have not been successful, they can give us valuable lessons on the key success factors of consumer engagement.

Does this mean that co-creation is a risky or unprofitable strategy?

What is certain is that the development of a website, the acquisition and animation of a community, the monitoring of projects, commercial efforts … it comes at a cost. Bernard Cova thinks that co-creation is inherently problematic (that word may be a little strong) because the interests of the company and those of consumers are not aligned, and that this creates more frustration than satisfaction. This is a perfectly valid point of view, but we must not refuse to involve consumers. We are only starting to take a step back on these participatory phenomena, and I hope that we will learn more by observing successes and failures, both in England and abroad …