Facebook is launching live audio rooms in The United Kingdom and around the world! -

Facebook is launching live audio rooms in The United Kingdom and around the world! 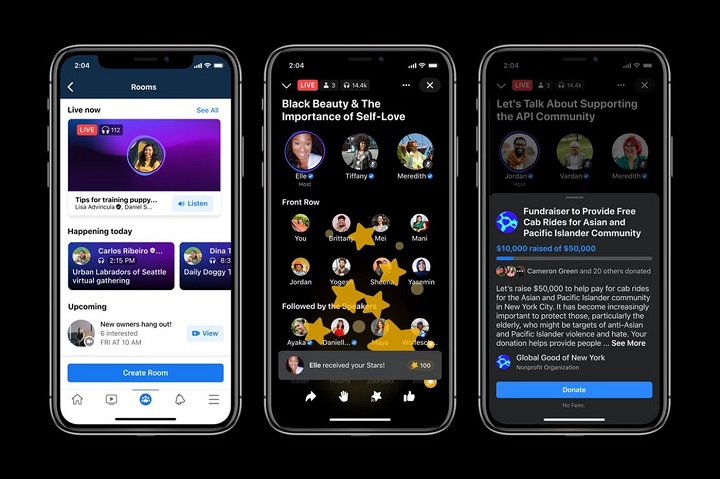 Launched in response to growing interest in Clubhouse, Facebook’s audio rooms, Live Audio Rooms, will allow users to host live audio chats on the platform. The social network had already started testing this feature earlier in the United States on iOS and Android, but the official announcement regarding the global launch was made on October 11, 2021. It is therefore accessible through Watch’s top navigation, the Facebook video hub – a design choice that still seems a bit difficult to understand, given that audio content is meant to be listened to, not “watched”.

“Starting today, all public figures and verified creators will have the option to host Live Audio Rooms. We have seen it become a great tool for light connection and conversion between different types of communities. ” (Alexandru Voicea, Facebook Technology Communications Manager)

Facebook’s live audio rooms will be displayed at the top of the feed for those who follow each creator, but also via a feed post. The playback format is very similar to Clubhouse, but Facebook Reactions icons will float on the screen as they are applied, much like live video feeds.

It is similar to the Clips option recently launched by Clubhouse, although Soundbites also provides audio filters and editing options. Facebook plans to roll out this feature to more users in the United States in the coming weeks.

Until recently, major social networks, such as Facebook, Twitter, Instagram, TikTok, Twitch, and Snapchat, mainly used images, videos, and text to allow their users to create and share content. For several months now, social audio or voice-based social networks have been gaining momentum, especially with the official launch of Clubhouse in April 2020.

In February 2021, this application had 10.1 million registered users against 600,000 in December 2020 and only 1,500 in May 2020. It has also been downloaded more than 10 million times. Clubhouse is also the 6th most popular application in the “Social networking” category of the App Store, behind Facebook, Messenger, WhatsApp and Discord (Source: Vlad Cerisier).

Audio is the primary medium of communication, and can include live chat rooms, voicemail, audio creation and editing tools, podcasts, and more. Given its enormous potential and the explosion of the trend, social networks have launched their application, such as Twitter with Twitter Spaces, or Facebook with Live Audio Rooms.

It’s hard to say if social audio will remain a popular element, or if this was a fleeting pandemic-induced social media trend that provided a new way to stay in touch and improve social media. audio experience of users on the social network. But we can see that Facebook intends to exploit this trend by venturing deeper into social audio and live audio.