Facebook tests an AI that recreates all styles of writing 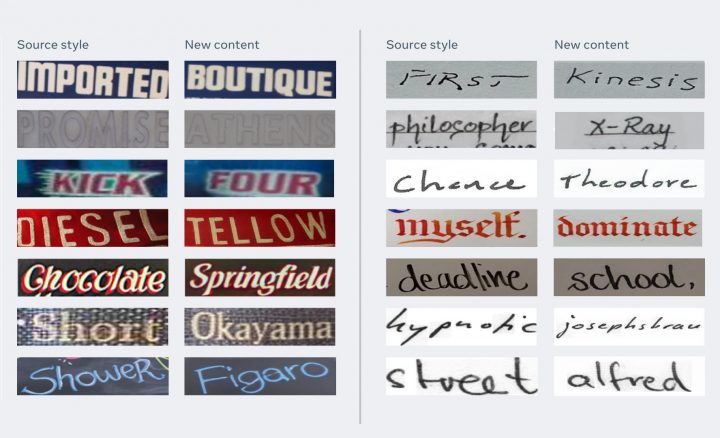 Facebook unveiled TextStyleBrush, a new artificial intelligence research project. This is the first self-supervised AI model that can replicate and replace text in handwritten and real-world scenes using a single sample word from an image …

A new AI model capable of rewriting any text

Facebook is currently working on a new model of artificial intelligence whereby users can rewrite any text as it is written in any image and whatever it takes to copy the writing style.

Called “TextStyleBrush”, it can be used for a variety of purposes. But its main objective is to bring a great advance in the translation of texts, even written by hand, and that it can also be used for a more creative chat.

According to Facebook, it displays high accuracy in automated tests and user studies for any type of text. While most AI systems can replicate and replace text for well-defined, specialized tasks, TextStyleBrush is indeed different. It can reproduce text both in handwriting and in real world scenes. Much more difficult technology for an AI model due to the different text options and nuances involved.

The AI ​​model works in a similar fashion to the typography style brush tools used in word processors. The method is applied to the aesthetics of text in images.

TextStyleBrush already has its limits …

In developing TextStyleBrush, Facebook said that this included working with text written in metallic objects or text with characters in different colors.

While at first glance this AI model seems like an innovative and efficient way to copy and replace text, it shouldn’t be seen as just an innocent tool, either. One of its first drawbacks is that it can be used to deceive others and forge documents, for example.

Facebook also recognizes the extent of deepfake text attacks, content rigged for manipulation. He hopes that by openly posting his research to TextStyleBrush, he could encourage further research to anticipate these attacks by building robust systems to combat them.