Finally express yourself differently on LinkedIn with this new emoji reaction! -

Finally express yourself differently on LinkedIn with this new emoji reaction! 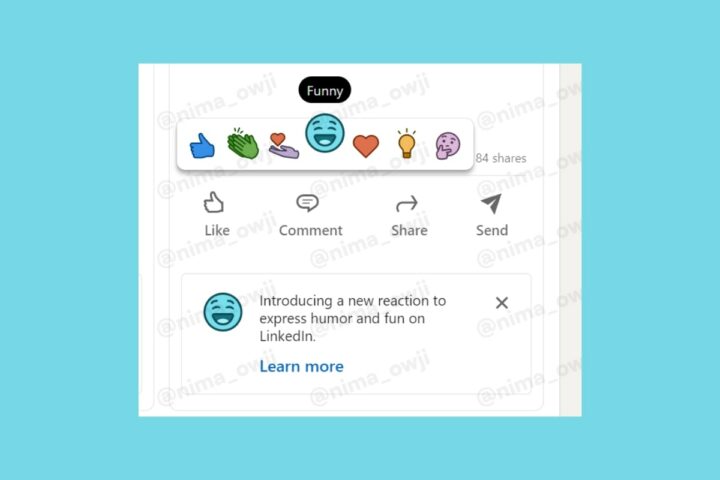 Some users were looking forward to it. Finally express how you really feel with this fun new reaction on LinkedIn, just like with Facebook reactions…

LinkedIn is looking to expand its emoji reactions by adding a new “funny” emoji, as the name suggests a laughing emoji. Soon, we’ll all have another way to quickly respond to funny content.

A few days ago, app researcher Nima Owji, teased his followers with a preview of what the new funny reaction on LinkedIn will look like.

Although it is the largest professional network in the world, there is always room for humor and jokes. Surprisingly, on LinkedIn, the “laugh” reaction was one of the most requested updates. Last February, Tommy Cohen, Chief Product Officer of LinkedIn had indeed said as part of a larger update that he and his team have been working on:

“One of the main requests we received – a laughing emoji reaction. We hear you loud and clear and we agree. Humor is indeed serious business 😉”

A petition had already been sent to LinkedIn to include this emoji reaction on the platform. Before this update, users couldn’t smile or laugh on the app, a telling issue. Some describe the app as “cold” and unwelcoming compared to other social networks.

This is a small change, but with big implications for making the Linkedin interface more welcoming and enjoyable for its users. This update, however small, helps build better human connections.

Linkedin hasn’t announced a specific date for its official release and hasn’t yet added it to its feedback help page, but it might be soon. It normally updates its help pages before releasing new features.

Other social networks are following the trend

Emoji reactions also enjoy great popularity outside of LinkedIn. In early May, WhatsApp rolled out this feature by officially introducing Emoji Reactions.

Similar to Facebook Messenger, this feature features a row of emoji just above a message from WhatsApp users. For starters, only 6 common reactions are available, but WhatsApp’s parent company Meta said support for “all emojis and skin tones” will be added gradually.

The feature gives users of the messaging app a quick and easy way to reply to a message (a thumbs up or thumbs down in iMessage, for example) without having to type a longer text reply into the thread. discussion.

In chat, a reaction with an emoji in response to a message is often sufficient to signal to the other party that it has been read, understood, found funny, for example. It allows you to react quickly and humorously to current events without contributing to information overload.