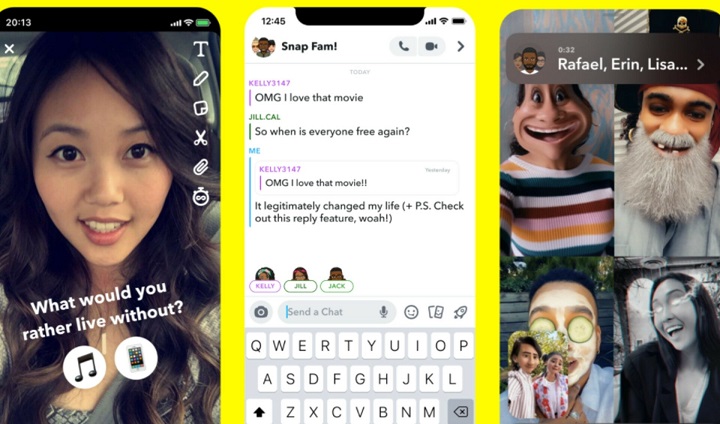 Snapchat unveiled four new messaging features that it says aim to make chats more fun and expressive. They will all be deployed on Android and iOS in the coming days …

Snapchat says, ” To kick off the New Year, we’ve added a host of new features to Snapchat messaging that make chatting with your real friends more fun and expressive. ”

Let’s start with Chat Replies. You will now be able to reply to specific messages on Snapchat , just like you can on WhatsApp. To do this, you can long press on the message and select the ‘Reply to chat’ option to provide a reply or swipe left on a message to reply to it.

You can also react to a message in a Snapchat chat with Bitmoji Reactions . To do this, long press on the message to see a row of Bitmoji emoticons and choose the one you like. It will work the same as when you react to messages on Facebook Messenger, Instagram, and even Twitter. Except the ones on Snapchat have their own unique identities and aren’t just emoji reactions (if you’ve created your Bitmoji).

In a discussion thread, you will now be able to choose one of the seven Bitmoji reactions, providing a quick way to reply to messages, while integrating the use of Bitmoji.

Additionally, Snapchat offers emoji-powered poll stickers, which can be added to both Snaps and Stories to poll your friends for their thoughts on a particular issue.

Just like Instagram Poll sticker, it allows you to add different types of poll stickers to Snap Stories to know people’s opinions. This feature will work for both iOS and Android users. If you post a poll, you’ll be able to see who voted for what.

On Snapchat, a user can ask a friend a question. Participants can then select the music note emoji or cell phone emoji to cast their vote.

“Our visual polls work on iOS and Android, so all your friends can weigh in and give their opinion. Plus, our polls have been designed with transparency in mind – you can see how your friends have voted to ensure responses remain thoughtful and kind. “

A new feature in group chats

Snapchat is also adding a new option to reply to individual messages in an ongoing group chat, allowing you to specifically address any comments with a separate thread.

The feature will be familiar to those participating in group chats on Messenger, given that Meta added the same feature in 2019. The option will make it easier to ensure that your messages are understood, while providing more context for all members of the group chat.

Finally, the ephemeral messaging app has improved voice and video calls to make conversations more fun with an improved interface and the ability to easily add Lenses. It will also allow you to see who has joined the call before you.

These are all relatively minor tweaks, but everyone’s doing their own thing so Snap can boost engagement and interaction through its chat and group calling options. Each of the new features is now available in the latest version of the app.