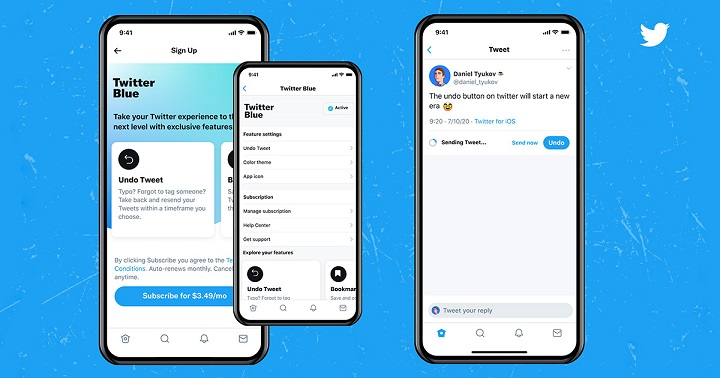 It had long been speculated that Twitter would introduce a paid service. Twitter Blue, once launched, was not initially rolled out in Australia and Canada until June 2021. With this option, users receive an array of additional features in exchange for a monthly subscription. And precisely, the social network has just offered new features for a better user experience …

Twitter Blue was rolled out in early June 2021 and is currently only available in Canada and Australia. It is a paid version of Twitter that offers new features regarding organization, creation of tweets and user experience on the platform.

Twitter Blue already has some great perks and is constantly promoting the regular rollout of new features, based on user feedback.

Twitter users, for example, have long requested a feature like “edit” or “cancel” tweets. While Twitter chief executive Jack Dorsey told Wired that an “edit” option would likely never debut on the platform, the new “Cancel Tweet” option is a step forward and is rather well received. It allows users to set a timer of up to 30 seconds to preview a tweet they are about to send, allowing them to remove the tweet that should be edited.

With its new paid features, in a US Securities and Exchange Commission (SEC) filing, the company said it aspires to have 315 million “monetizable daily active users” by the end of 2023 .

The updated info cards on Twitter Blue describe some new features of the option.

On the basis of these new introductory cards, Twitter Blue subscribers will also soon have access to:

Twitter Blue’s other offerings, at the moment, are pretty basic, but these new additions could help Twitter make Blue a more attractive option for more users.

Twitter recognizes that the tool is not designed primarily for marketers, but for the inseparable followers of the platform. So let’s wait and see and understand what will make sense for brands in the future.