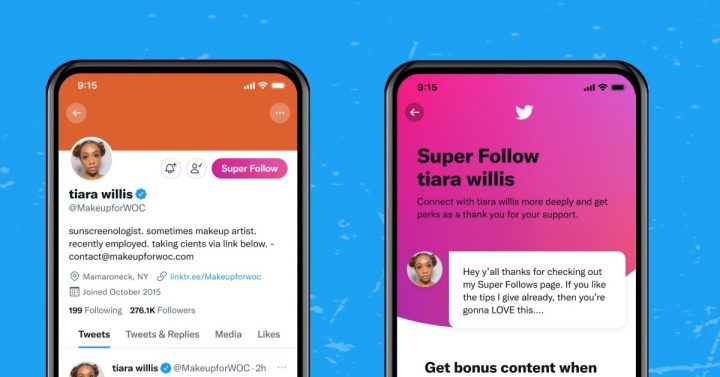 In test mode for a few months, Twitter has officially launched its new option “Super Follows”. Some creators can now offer a premium subscription option for exclusive and additional tweets for their biggest fans …

After a few months of testing, Twitter is officially launching a new e-commerce alternative, Super Follows, starting with a group of creators in the United States who have already applied to participate. Users will be able to create an extra level of conversation on Twitter with bonus Tweets and exclusive interactions, creating a sense of exclusive community while increasing their income.

By defining monthly subscription fees of $ 2. $ 99.4. 99, or $ 9. 99 per month, creators can choose to tag certain tweets only for subscribers, while still reaching their regular followers in regular tweets.

Paid subscribers will be branded with a special Super Follower badge, differentiating them from unpaid subscribers in the many tweets. The badge appears in responses, increasing a subscriber’s ability to interact directly with the accounts they choose to support. For accounts with Super Follows enabled, the option will appear with a separate button on the profile page.

This is not Twitter’s first experience with monetization. Last May, the social network presented Tip Jar, a way for accounts to receive one-time payments through integration with the Cash app and other payment platforms. The test is limited to a subset of eligible accounts, including “creators, journalists, experts, and nonprofits” at this time.

This new feature could inspire Twitter’s most popular creators to become even more active on the platform. Once users have signed up to become Super Followers, creators will have a new option to share their tweets normally or exclusively for those members.

The exclusive tweets will then be flagged in the feed, so super followers know only they can see that content. This adds an additional level of exclusivity to the process.

Twitter claims to have built its Super Follows approach on four key principles based on discussions with the creators: Fun, Fame, Feeling the love, Funds.

But it is still in its early stages at the moment. Super Follows is limited to a small group of selected creators on iOS. This is because only iOS users in the US and Canada can track certain accounts. Nonetheless, Twitter says it will roll out the new option to users around the world, then to Android and the web.

All applicants must respect several criteria to access Super Follows, the main ones being:

The principle of Super Follows is the goal of many brands and companies, to get paid for what they already do almost naturally every day on social networks. But it will probably be more difficult than many think, because while sharing tweets with a group of followers seems simple enough, it will require a good planning of animation of its social networks and a well thought out social media strategy to deliver a real added value to its paying customers.

In any case, this new feature should be followed closely since it can become a valuable asset for Twitter. It encourages “power users” to tweet more often and connect with their key audience in the app, increasing their visibility and engagement rate more easily.